Mogherini: In June, North Macedonia and Albania will Start Negotiations with the EU 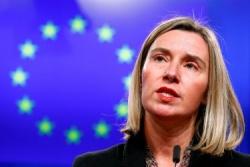 "When you look at the map of Europe, you see the Balkans as part of it, so instead of the term enlargement, I personally want to talk about the reunification of the Balkans with Europe," Mogherini said at the Foreign Policy Committee of the European Parliament.

According to her, with consistent policy, the EU can get the maximum impact. She reiterated that "North Macedonia and Albania will start accession negotiations with the EU in June."