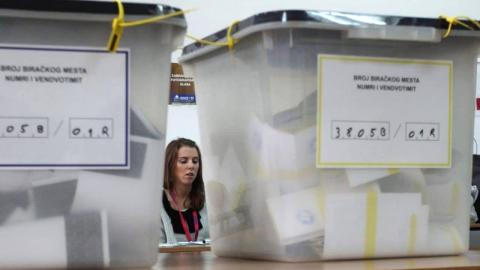 An election staff member waits for voters in municipal elections at a polling station in the ethnically divided town of Mitrovica, Kosovo. EPA/DJORDJE SAVIC

The Belgrade-backed Serbian party in Kosovo, Srpska Lista, will face no opponents in the upcoming local elections in northern Kosovo, as it is the only party representing Serbs that has applied to run.

The Kosovo Central Election Commission announced on Friday that the deadline had expired for parties to apply to take part in the snap elections due on May 19 in four Serb-majority municipalities.

Lista Srpska, strongly supported by the Serbian government, has the highest chance of winning. Its mayoral candidate for Leposavic is Zoran Todic; for Zubin Potok it is Srdjan Vulovic; for Zvecan it is Vucina Jankovic; and for North Mitrovica it is Goran Rakic, Zeri newspaper reported on Friday.

The PDK has governed the country in coalitions with other parties for more than ten years. But neither the PDK nor Vetevendosje has a chance of challenging Lista Srpska in these mainly Serbian districts.

Websites report that the government has allocated 471,000 euro for the extraordinary elections in the four municipalities.

President Hashim Thaci called the elections to replace mayors who resigned last year after the government imposed a 100-per-cent tax on imports from Serbia and Bosnia.

Past elections in the north of Kosovo have always created tension in the Serbian community, often matched by incidents.

Oliver Ivanovic, former leader of the Freedom, Democracy, Justice party, who was running for the post of mayor of...