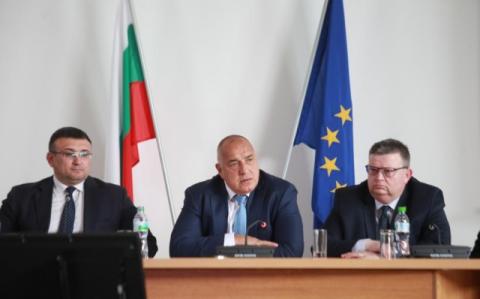 Record quantities of detained heroin, marijuana, cocaine and synthetic drugs are reported, Prime Minister Boyko Borisov announced during a National meeting of the MoI leadership. Smuggling cigarettes is known to have dropped below 5%, he added.

"We continue to work. Many colleagues worked well, "said the prime minister. According to him, the quantities of drug retained are the most worthy answer to statements about the work of the services. "The facts and quantities of detained drugs are present," the prime minister stressed. "I want to tell the media that this time, our old weakness hastened to boast, its colleagues have already overcome it," said Boyko Borisov.

On the occasion of the broken phone fraud group in Romania and Bulgaria, the prime minister said: "We are not just working with mules but with the whole criminal scheme. I hope they can take possession and property of these people to compensate victims, I do not know if the law allows it. " "It is heartbreaking to see how elderly people lose their savings," Borisov added.

"There is much talk about the Smolyan murder, it is very much said that it looks like this movie" The Devil's Throat. "I am glad that my colleagues worked quickly and found the perpetrators," the prime minister said on the case of a man's body found outside Smolyan.

Borisov also mentioned a murder in Troyan. "I allow my colleagues from Lovech to tell the media about the murder of 2017 - a brutal murder, a raped and decapitated woman. Person has been detained, there are confessions," the prime minister revealed.

"I congratulate the colleagues from the SDR for the quick reaction yesterday, and they quickly caught the murderer from Mladost." The murder of Lovech coincided with the one from Rousse, Borisov...

Which EU countries open borders and when, which opened borders for citizens of Serbia
PM Orban: The biggest proof of respect for the heroes is to attract the young to learn history
POST-REVOLUTION ROMANIA, 1990: Federation of Ethnic Roma (FER) sets up in 1990
PM Orban phone conversation with Chancellor Merkel;talks also aimed at situation of Romanian seasonal workers in Germany