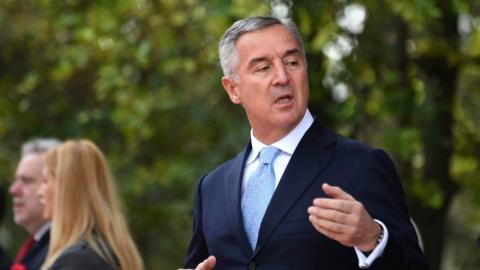 The President of Montenegro, Milo Djukanovic, on Thursday filed a lawsuit against the independent daily newspaper Vijesti and the businesman Dusko Knezevic over claims that he took bribes.

Djukanovic, who has held power in the country for almost 30 years, said he was seeking a total of 100,000 euros in damages for insult and injury to his reputation - 50,000 euros each from Vijesti and from Knezevic.

It comes after Vijesti published an interview with Knezevic on March 16 under the title "Djukanovic, me and a bag of money".

In it, the businessman and former ally-turned-foe of the President, whose arrest is sought by the authorities, claimed he had a video of Djukanovic receiving bag of money from him.

The cash was to be used for the political campaigns of his party, the ruling Democratic Party of Socialists, DPS.

Knezevic said he had other evidence to prove the wrongdoings of Djukanovic and other DPS officials.

However, although he has promised to release the video of Djukanovic taking money several times over the past month, it has not happened, sparking doubts about whether it exists.

In the complaint filed to the court in Podgorica, Djukanovic said the media outlet was "unprofessional and wanted to deceive the public."

His court papers called the interview's claims a notorious falsehood, published with the intent to inflict enormous damage on the President in retaliation for prosecutors launching investigations against Knezevic.

"Knezevic presented a false fact about the...