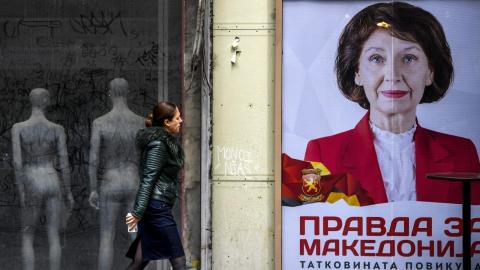 Meanwhile, the main problem blocking progress has been solved - 'North Macedonia' has become a reality. Or has it?

This Sunday will see the first round of presidential elections.

The vote will put an end to the mandate of a president who has never, not for a single moment in his ten years residing in the villa above the city, allowed a hint of doubt that he was not the president of his people, but of his benefactor, Gruevski.

It will put an end to the mandate of a president of uninspired political manoeuvres, of obscure convictions, of stubborn denial and of refusal - above all, a refusal to acknowledge the country's change of name and the new reality it created: de-facto NATO membership, an open path towards the EU and a serious blow to pro-Russian forces.

But total state capture is not something a society recovers from overnight.

The legacy of those who captured it is alive today, as is a collective Stockholm syndrome.

I went recently to the opening of a film festival. The opening ceremony naturally used the official name of the country - North Macedonia. One could not miss the rolling of eyes, the collective frown at listening to that name being spoken aloud. It was not the majority in the hall, but still enough to be noticed.

Meanwhile, what will probably go down in history as the least inspiring electoral campaign in a long time is nearing its end. Apart from a heap of unrealistic promises, mainly ignoring the fact that the president has nearly no executive power, one thing remains a worry: the opposition's promise to undo the name change.