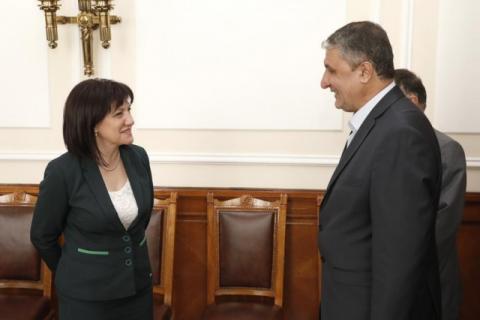 National Assembly President Tsveta Karaiancheva spoke with Iran's Minister of Road and Urban Development Mohammad Elami. The guest is visiting Bulgaria for the 19th session of the Joint Bulgarian-Iranian Commission for Economic and Scientific and Technical Cooperation.

Bulgaria attaches great importance to the development of its traditionally good relations with Iran, the President of the Bulgarian Parliament stressed at the meeting. Tsveta Karaiancheva expressed hope that the joint efforts of the governments and parliaments of Bulgaria and Iran to support the full exploitation of the potential for trade and economic cooperation between the two countries and the interaction in areas of mutual interest.

Iran's Minister of Road and Urban Development Mohammad Eslami expressed satisfaction with the work done by experts in the Joint Bulgarian-Iranian Commission for Economic and Scientific and Technological Cooperation. We hope that the eight signed instruments will contribute to the utilization of the existing opportunities for a better development of the relations between Bulgaria and Iran in a number of areas, he stressed.

National Assembly President Tsveta Karaiancheva pointed out that Bulgaria attaches the highest importance to deepening bilateral relations in the fields of transport, tourism, youth and sports, agriculture, energy, etc. She welcomed the upward development of cooperation in the fields of culture, science and education, spheres that help mutual understanding of our two nations.

An important role for the successful development of the bilateral relations has the members of the Friendship Groups operating in our legislative institutions, Tsveta Karayancheva stressed. She reminded about the invitation to the President of the...