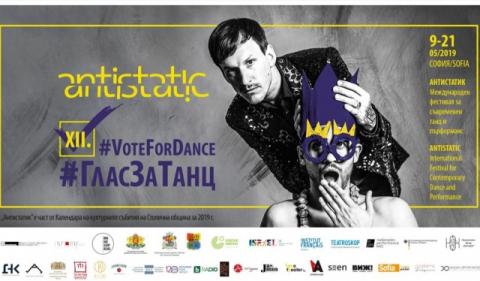 Tickets are already in sale at discounted price of 10 BGN

From 09th to 21st of May a committed and active, yet non-political election campaign will be held in Sofia: the 12th edition of Antistatic International Festival for Contemporary Dance and Performance. Under the dense political agenda of today Antistatic is raising its voice thus: #VoteForDance! A vote "FOR" art as a dimension not merely knowing well the past and understanding the lines of the present but as one that can and does create a better future.

In 2019 the festival meets its audience with artists from Canada, Israel, Brazil, France and Germany and with participants from Croatia, Slovenia and Romania within its new programme Center/East. Tickets for all the shows are already in sale at discounted price of 10 BGN online at EPAY-GO. At the day of each performance the price will be 15 BGN at the box office of the National Palace of Culture.

On 9th of May at 7 PM Antistatic kicks off at KICK'S Bar with the premiere of vol. 1 of the brand new MAGAZINE FOR DANCE - the only annual printed edition in Bulgaria, dedicated entirely to presenting processes, personalities, events and ideas from the world of classical to contemporary dance and dance culture. The opening entrance-free concert of burning Romanian synth-pop band KARPOV NOT KASPAROV begins at 9 PM at the same place. Describing themselves smilingly as "one of Eastern Europe's most exciting musical projects" and having already played in 38 European countries, the band makes its music based on the rules and strategies of chess. And the output is always a very danceable tune.

On 10th of May at 7:30 PM at DNK - Space for contemporary dance and performance Manuel Roque (Canada) presents his awards-winning performance BANG BANG,...

Parliament in Paris has Begun Debates on the Controversial Pension Reform

Chanel Postponed a Fashion Show in China because of the Coronavirus

Just for a Day: 690 Fines for Cars without E-Vignettes

MMA: The Students who Returned from China aren’t Infected with Coronavirus