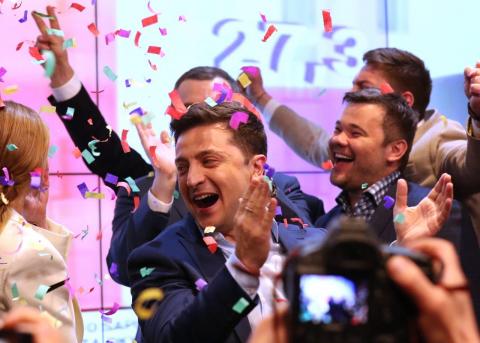 Expatriate Ukrainians in Serbia, Bulgaria, Macedonia, Greece, Romania, Croatia and Montenegro mostly voted on Sunday for a second presidential term for Petro Poroshenko, who was defeated in a landslide by comedian and TV star Volodymyr Zelensky.

Zelensky won the presidential election in Sunday's second round, winning 73.2 per cent of the votes, while outgoing president Poroshenko polled 25.3 per cent.

The Ukranian Central Electoral Commission said that 52.81 per cent of Ukrainians living in Serbia who had the right to vote in Sunday's presidential election - including Ukrainian soldiers from NATO's Kosovo-based peacekeeping force KFOR - chose Poroshenko.

However, Ukrainians living in the former Soviet republic of Moldova voted for Zelensky, giving him 71.31 per cent of the vote.

Zelensky, who starred as a fictitious candidate in a popular Ukrainian television series called 'Servant of the People', campaigned as an alternative to the current political system which has been crippled by corruption.

Zelensky said that his party, named Servant of the People after his TV series, will not make any alliance with the Solidarity Party led by Poroshenko or with pro-Russian political forces in Ukraine.