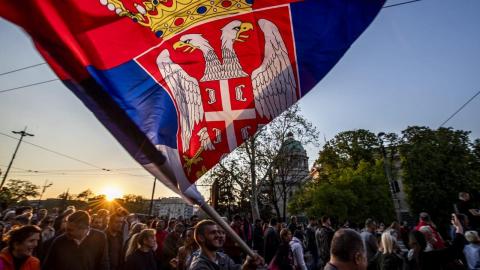 The headliner on stage was of course Vucic, but, before that, musicians and Vucic's closest political allies came on to warm up the masses.

The atmosphere in the crowd was calm, without the expected enthusiasm. This was not strange, having in mind that most of the people had been brought from remote parts of Serbia and had travelled for hours just to fulfill an obligation.

In Belgrade, they were equipped with flags, banners, fed sandwiches and paid per diems. When the headliner had finished his performance with a call for unity, and once he said he would never perform again in front of such a big crowd, people left the city centre immediately, having in mind the hours they would have to spend on the way back home.

So what was the purpose of all this? What did we learn from this event?

First, we learned that event management matters. The whole thing was perfect in terms of logistics: weeks before it took place, all the units of Progressive Party had received detailed instructions about the number of people they were obliged to bring, the budget they had for that and the places they should park their buses once they reached Belgrade. For these purposes the city was blocked out and transformed into huge parking lot and pedestrian zone.

The main stage was erected a day before the event; huge screens were placed around the...