Tsipras in China for Second Belt and Road Forum 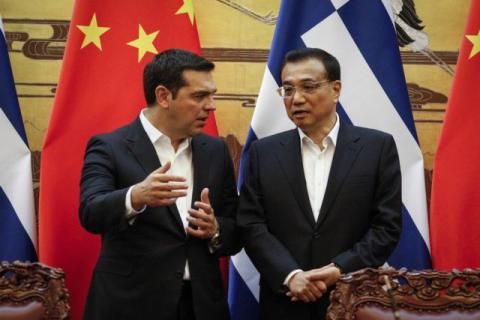 Prime Minister Alexis Tsipras and Foreign Minister Yorgos Katrougalos are in China for the Second Belt and Road Forum for International Cooperation, based on the ancient Silk Road, linking East and Southeast Asia with East Africa, West Asia, and southern Europe.

Greek government sources have stressed that Greece-China cooperation will in the coming period focus on investment, hi-tech, and banking.

Following the acquisition of the Port of Piraeus with a 35-year franchise by Chinese commercial giant COSCO, Greece has become a very important transportation hub for Chinese products which are to reach other EU countries by rail transport and the Middle East.

In August, 2017, Greece officially joined the Belt and Road Initiative with a memorandum of understanding signed by then Greek foreign minister Nikos Kotzias and his Chinese counterpart Wang Yi in Beijing.

The deal is also expected to bring major investment in infrastructure.

The cooperation with Cosco has made Piraeus the second largest port in the Mediterranean and it is moving toward first place.

"Piraeus, the fastest growing port in the world, will be the largest port in the Mediterranean by 2019, displacing Hamburg from third place in Europe", the German newspaper Die Zeit reported last year.

The Greek and Chinese sides are to sign a new three-year cooperation framework between the Greek Economy Ministry and China's Development and Reform Commission. The MoU focuses on the energy, transport, telecommunications, manufacturing, research and development, and...