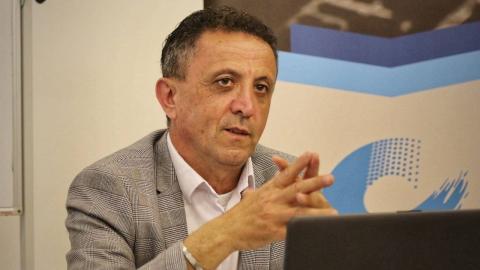 The harsh sentence drew strong criticism from international human rights organisations, media unions and NGOs. After his release from prison, he spent another eight months under arrest.

His book about his experiences, Life in the Box, was first published in Macedonian in 2017 - the year Gruevski was toppled from power.

It has since been translated by Jasmina Velkova into English. The cover shows Kezarovski in jail, when his weight dropped to 59 kg, he said.

Kezarovski dismissed the idea that the former strongman had nothing to do with his imprisonment.

"Gruevski said multiple times that he doesn't know who I am - that is a lie. This document says the secret police bugged my phone in 2007 and were following me from then until my arrest," Kezarovski said, holding a paper in his right hand.

"I must be one of the most important men in the world! Special forces sent 35 men to arrest me while [only] five US soldiers detained Osama bin Laden," he joked.

He believes he was targeted by a politically influenced judicial system for his probes into corruption and effectively treated as a public enemy.

"The Supreme Court said I would spend 'only' two years in prison; I was informed I could have got seven to 15 years," he noted.

He called himself the "only journalist political prisoner in Europe" at that time, "if we don't count Turkey".

Kezarovski said he shared an eight-square-metre cell with four to five other people. He went through tough times, he said, as he could not study or even read the newspapers.

But he said two things kept him strong. One was that he was polite to the prison guards who - because of this - tended to allow him more than some other prisoners, which earned him respect in jail.