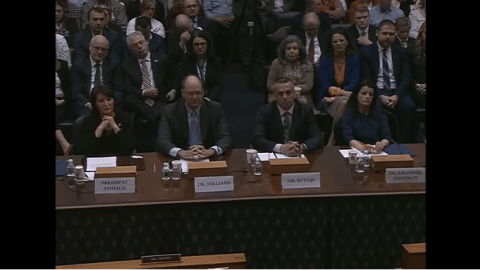 Vasfije Krasniqi Goodman, the first woman in Kosovo to speak publicly about being a wartime rape victim, testified at a US House of Representatives' foreign affairs committee hearing in Washington DC on Tuesday that the US should push for justice for victims of war crimes.

In highly emotional testimony, Krasniqi Goodman told the committee hearing, entitled 'Kosovo's Wartime Victims: The Quest for Justice', that she was 16 when she was raped by Serbian police in her village in 1999.

"[Afterwards] I cried with no control, begging him to kill me. No, he said, I won't, because you will suffer more this way. He was right, I have suffered," she said.

She told the hearing that all she wanted was justice.

"I will never have peace with my past until justice is delivered. Thus today I call on the representatives of the United States Congress to address impunity for war crimes and abuses by taking immediate action to seek justice for survivors," she said.

Kosovo's ambassador to Washington, Vlora Citaku, praised Krasniqi Goodman's testimony, saying it made a huge emotional impact on the US Congress members who were present.

"There was silence and tears in the room," Citaku wrote on Twitter.

Ilir Bytyqi, an Albanian-American whose three brothers were killed after being detained by Serbian police in 1999 after the Kosovo war ended, also testified at the committee hearing about his campaign for justice.

Bytyqi accused the Serbian authorities of shielding the killers.

"President [Aleksandar] Vucic protects the criminals who murdered my brothers," he said.

The three brothers' bodies were found in a mass grave at a police training centre in Petrovo Selo in eastern Serbia. The Serbian authorities opened an investigation...