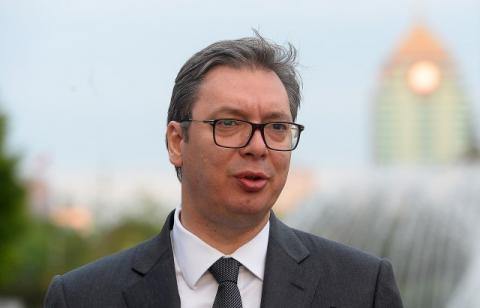 President Aleksandar Vucic wrote this in an op-ed published by the daily Kurir.

The president said that "regardless of the growing strength of China and Russia, the enormous strength of America, we must understand that without the Germans and the French, but also the Italians and other Europeans, we will not be able to solve any of our problems in the future."
His message is that "the sooner we start to, together with Europe, but also with other world powers and with each other, with cold and clear heads, work on resolving rather than stoking up problems, the sooner we will become a European reality and present, and not just its long forgotten myth."
"It's important to become a part of the EU, but what's more important is to survive and secure a safe future for our children, regardless of all the formal frameworks in which we will be moving. None of us can do it alone, so we need friends," Vucic emphasized.
Recalling his visit to Beijing, the Serbian president noted that China is the world's leading force in the field of artificial intelligence, industrial robotics, and that Europe can hardly reduce its lag behind in modern technologies compared to the Asian giant - and believes that the positioning of Serbia as a reliable partner and a sincere friend of China is essential for the future of the country. At the same time, he notes that we "cannot make the mistake of underestimating the importance and role of Europe."
"Beijing brought us better news that we had hoped for, but preparations for Berlin were difficult, and expectations low," he writes.
Vucic pointed out that there are opportunities that should not be missed, such as the meeting in Berlin earlier in the week - "which is the point of deciding whether next year will...