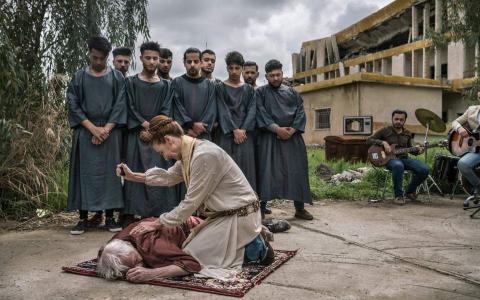 The mythical figure of Agamemnon lies dead against the backdrop of the ruins of the war-torn Iraqi city of Mosul during rehearsals of an adaptation of the 'Oresteia,' a trilogy of Greek tragedies written by Athenian dramatist Aeschylus in the 5th century BC. 'The Orestes of Mosul' by Swiss theater director Milo Rau and his Belgium-based NTGent theater company features amateur actors, residents of the troubled city which once served as a bastion of now-defunct Islamic State. The play began its tour in April in Belgium. [Sergey Ponomarev for the New York Times]

Tall Story: Stashed Cash but No Crime in Albanian Court
IntMin Vela: Measures during pandemic of novel coronavirus, although restrictive, are correct