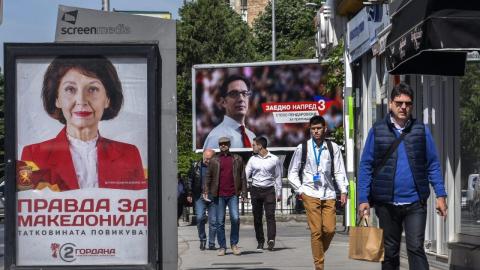 Polling stations opened on Sunday in the presidential election run-off in North Macedonia, amid fears that if the turnout is as low as it was in the first round, two weeks ago, the election process is in danger.

A total of 3,480 polling stations opened at 7am for an election in which some 1.8 million people have the right to vote.

Voters may choose between two remaining candidates who will hold office for five years.

Stevo Pendarovski, who took a slight lead of just a few thousand votes in the first round over his rival, Gordana Siljanovska, is supported by the governing Social Democratic Union, SDSM, and its junior partner, the ethnic Albanian Democratic Union for Integration, DUI.

Pendarovski has pledged to continue the quest for NATO and EU membership and support the pro-Western policies of the SDSM-led government under Prime Minister Zoran Zaev.

He supports the historic agreement that the country struck last year with Greece over its name, which removed the most important obstacle preventing Euro-Atlantic accession.

Although she calls herself pro-Western, she is against the internationally backed name agreement with Greece, which resulted in the country having to change its name to North Macedonia.

While she had said she would respect the agreement, she deems it unconstitutional and humiliating, and has said she will seek to undo the damage it has done to national identity.

During the second half of the campaign, both candidates were competing to attract more undecided voters and motivate the country's sizeable ethnic Albanian minority to support them. Albanians make up about a quarter of the country's population,

Benefit for newborns being voted in Parliament