13 Police Officers Died in a Taliban Attack in Afghanistan 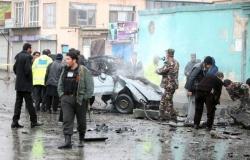 At least 13 police officers died in a Taliban attack on a police headquarters in the province of Baglan, the France press reported. The attack, started at noon in Pugli Homer, has 35 injured police officers and 20 injured civilians, a spokesman for the interior ministry said in a statement.

"A coordinated attack on the Baghdad police headquarters ended with the deaths of all terrorists," he said, adding eight. It lasted six hours.

The Taliban was responsible for the attack. Their spokesman, Zabiula Mujahid, said a fighter had blew up a car bomb in front of the building, after which the headquarters had been stormed by several Taliban.