Karadzic Phones in to Montenegro Debate From Jail 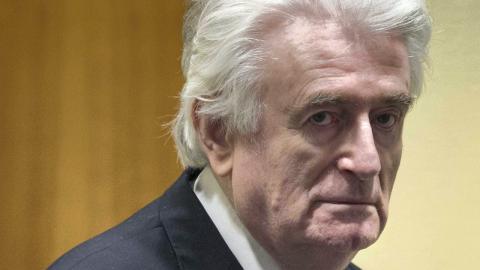 The Mechanism for International Criminal Tribunals has so far not taken any action to sanction Radovan Karadzic after he addressed a public discussion in Montenegro over the telephone from the UN Detention Unit in the Netherlands, his lawyer Peter Robinson told BIRN on Monday.

Former Bosnian Serb president Karadzic, who was convicted of genocide and other wartime crimes by the Hague court in March, addressed a public discussion in the Montenegrin capital Podgorica over the phone on Saturday.

Another Hague Tribunal war crimes convict, Momcilo Krajisnik, was a guest speaker at the debate at the Srpska Kuca (Serbian House) in Podgorica.

Krajisnik told BIRN that he gave a lecture on the creation of Bosnia's Serb-dominated entity Republika Srpska in 1992 and other historical events "without bringing in politics and our unfortunate differences which exist in Bosnia and Herzegovina".

"Karadzic addressed them prior to my presentation. He mainly spoke about those differences and problems that exist in Montenegro, and about who was a Montenegrin and who was a Serb," Krajisnik said.

He argued that "nothing bad happened" when Karadzic addressed the event.

Karadzic's lawyer Robinson said that he had spoken to the former Bosnian Serb political leader about the incident, but due to professional confidentiality, he could not say whether or not Karadzic had asked the Mechanism for International Criminal Tribunals to allow him to use the phone for such a purpose, as required by the UN court's detention rules.

Former Bosnian Serb military chief Ratko Mladic was sanctioned by the Mechanism for International Criminal Tribunals over a similar incident last November, when he phoned in to take part in a live broadcast on Serbian television...