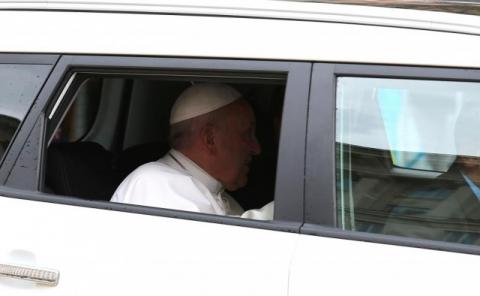 Prime Minister Boyko Borisov will send Pope Francis to Sofia Airport today (7 May), which marks the end of the apostolic journey of the Holy Father in Bulgaria.

From Sofia, the head of the Roman Catholic Church goes to Skopje.

The Holy Father arrived on May 5 in the Bulgarian capital with a papal congregation composed of 35 people - the highest representatives of the Holy See. Among them were the Secretary of State of the Holy See, Cardinal Pietro Parolin, as well as Cardinals Leonardo Sandri and Kurt Koch.

During his apostolic trip to Bulgaria with a message of peace on Earth, Pope Francis visited Sofia and Rakovski. The Holy Father had a meeting with President Rumen Radev, with civil society and the diplomatic corps. The head of the Roman Catholic Church met with the Bulgarian Patriarch Neofit in the Synodal Palace and prayed at the altar of the Holy Brothers Cyril and Methodius in the Cathedral of St. Alexander Nevski.

Thousands of believers, Bulgarians and foreigners, attended the Sunday prayer "The Trinity of Heaven", which Pope Francis pronounced at St. Alexander Nevsky Square. Every week the Queen of Heaven Prayer is being watched on the air by more than 100 million believers from all over the world, and now for the first time it sounds from the capital of Bulgaria. About 12,000 people attended the festive Holy Mass at Prince Alexander Square, which Pope Francis attended, attended by the Bulgarian Catholic Bishops Hristo Proikov and Georgi Yovchev.

In both Sofia and Rakovski, many believers had come to see, hear, and touch Pope Francis and some of them also took pictures of the Holy Father. Particularly exciting was the liturgy in the church "The Most Holy Jesus of Jesus" in Rakovski, where Pope Francis gave the first...