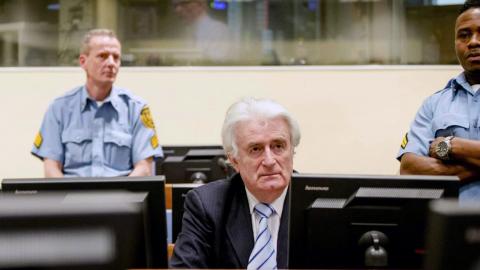 The registrar's office at Mechanism for International Criminal Tribunals has said that it will listen in on Radovan Karadzic's telephone calls for several days after he addressed a public debate in Montenegro by phone from the UN Detention Unit in the Netherlands.

The registrar's decision said that the commanding officer of the Detention Unit had not given Karadzic permission to use its communication facilities "to publicly spread information in any form".

The commanding officer was told to listen to and summarise Karadzic's conversations over the five days before May 6, apart from calls that are subject to legal privilege, and his conversations in the seven days from May 6.

"Monitoring and listening to the detainee's recent, previous and future non-privileged telephone conversations over a certain period of time is needed in order to investigate potential violation of the rules and help ensure security and order at the Detention Unit of the United Nations, and is in the interest of administration of justice," the registrar's office said.

Karadzic, who was convicted of genocide and other wartime crimes in March, addressed the public discussion in Podgorica over the phone on Friday. Hague Tribunal war crimes convict Momcilo Krajisnik was a guest speaker at the debate.

Former Bosnian Serb military chief Ratko Mladic was also sanctioned by the Mechanism for International Criminal Tribunals over a similar incident last November, when he phoned in to take part in a live broadcast on Serbian television station Happy TV.

The court ruled that Mladic's telephone calls should be monitored for a month.

Karadzic was sentenced to life in prison for the genocide of Bosniaks from Srebrenica, terrorising the civilian population of...