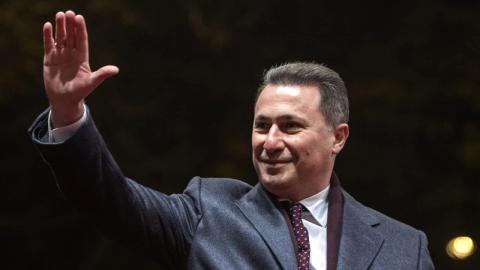 While the authorities in North Macedonia seek his arrest and extradition from Hungary, the country's fugitive ex-prime minister, Nikola Gruevski, has said he intends to release a new book, based on his PhD, at the ongoing Skopje Book Fair.

"Experiences for the Future" is based on his doctoral dissertation, titled, "Economic effects of the various types of international flows of capital including a particular look at the Republic of Macedonia", which he defended at the State Faculty of Economy in Skopje in July 2018.

In his foreword for the book, which he posted on Facebook, Gruevski, who was prime minister from 2006 to 2016, again complained that he had become a victim of political persecution before fleeing to Hungary and winning asylum there.

"The campaign of political persecution against me culminated in the autumn of 2018 and its perpetrators were in such hurry to have me imprisoned and removed that they used false testimonies, politically driven charges and a subordinate court, which wouldn't allow me two months to complete the book before being sent to serve out an undeserved prison sentence," Gruevski wrote.

Gruevski said the book will be published by the publishing house Gjurgja, which recently published a flattering book of Russian President Vladimir Putnin's quotes, "Putin: Words That Change the World".

Courts last autumn found Gruevski guilty of the illicit purchase of a luxury limousine and imposed a two-year jail term, which he was due to start on November 9.

He failed to do so and instead escaped to Albania from where, with the help of Hungarian diplomats, he reached Budapest and applied for asylum, which he got soon afterwards.

Back home, four other court cases are ongoing against...