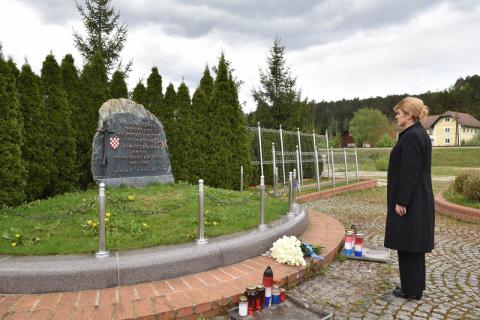 Croatia's president Kolinda Grabar-Kitarovic visited the sites of massacres of thousands of Croatian civilians and soldiers of the defeated pro-Nazi Independent State of Croatia (NDH) on Wednesday, laying flowers and lighting candles at Macelj, Bleiburg and Huda Jama.

The President paid tribute to "innocent victims killed by members of the Yugoslav Army after the end of World War II".

"The massive killing of prisoners of war and civilians, including wounded people and children, violated all civilization norms and provisions of humanitarian law, primarily the 1929 Geneva Convention on Prisoners of War," Grabar Kitarovic wrote in a press release.

"It was, in fact, the largest post-war mass crime in Europe after World War II, for which there is no justification, nor for any other crime committed against anyone and anyone," she continued.

To strike a political balance, the President on Thursday also paid tribute to the victims of Nazi rule and occupation.

She wrote on Twitter: "Marking Victory Day, May 9, we remember the Croatian anti-Fascists who gave a remarkable contribution to the ultimate victory over Fascism and Nazism".

The Croatian government also published a press release marking Victory Day, the day that marks Nazi Germany's unconditional surrender to the Allies in 1945.

"We recall many Croatian anti-Fascists who contributed to the victory over Nazism and Fascism in World War II, the end of the war in Europe and Croatia on the side of the winners," the government wrote, adding that it also wished to remember "many innocent Croatian victims … killed in the time of Communist Yugoslavia".

Asked about the visit by the President to Beliburg, Prime Minister Andrej Plenkovic said that he didn't know about it, but that...