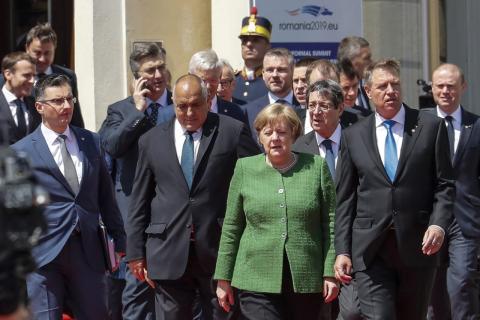 Weeks ahead of European Parliament elections that will see the formation of a new Commission, EU leaders adopted a Declaration on Thursday at the close of the European Council summit in Sibiu, Romania, emphasizing the bloc's main directions for the next five-year cycle.

The main points set out in the document concern the rule of law, the protection of democracy, sustainability, competition and unity inside the European Union.

Following the UK vote to leave the EU, as a result of which British Prime Minister Theresa May stayed away from Sibiu, there was a strong emphasis on unity.

"We will stay united, through thick and thin. We will show each other solidarity in times of need and we will always stand together. We can and we will speak with one voice," the EU leaders stated.

He argued that while the national states must take decisions that are also in the service of Europe, the bloc needed a strong and close relationship with the US.

The 10-point declaration also refers to the protection of European citizens, the need to reduce economic gaps between the member countries and the role of the EU in the world.

Disappointingly for would-be members in the Balkans, the document said nothing about possible enlargement of the bloc over the next five years.

In the Balkan region, Croatia, Slovenia, Bulgaria and Romania are EU members already. Serbia and Montenegro have opened accession negotiations and North Macedonia and Albania hope...