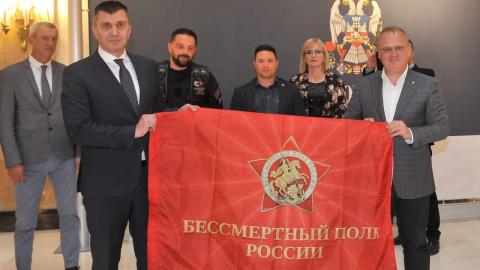 Events to mark Victory Day in World War II in Russia on May 9 will be staged in several cities in Serbia, Montenegro, Moldova, and in Bosnia's Serb-dominated entity, Republika Srpska, including several Immortal Regiment marches.

Immortal Regiment processions are events where people carry photos of relatives who participated in what Russia recalls as the Great Patriotic War. The phenomenon started in Russia over a decade ago and has since spread widely.

Processions have increasingly been organised by pro-Russian groups in other countries around the world in recent years.

A march will be organized in Belgrade on May 9, the Belgrade-based Immortal Regiment Foundation said. It will be attended by senior officials from Russia and Serbia, and supported by the Serbian authorities.

A march has been held in Belgrade since 2016 and will this year for the first time be organized in the northern Serbian city of Novi Sad as well.

Ahead of the Belgrade event, on May 6, Serbian Labour Minister Zoran Djordjevic handed over the flag of the Immortal Regiment that will be carried on May 9 at the City Hall to the deputy mayor of Belgrade, Goran Vesic,

Guests at the ceremony in City Hall included representatives of the Serbian branch of the Night Wolves, Sasa Savic and Dejan Ristic. Russia's largest motorcycle club is well known for its close ties to Russian President Vladimir Putin.

"I invite all citizens of [the southern Serbian city of ] Nis and Nisava district, the youth, students and pupils, to join us and participate in the march of the Immortal Regiment in Nis," Savic wrote on his Facebook account. "If we don't respect our people and victims, nobody will," he added.

Savic was banned from entering neighbouring Bosnia by the...