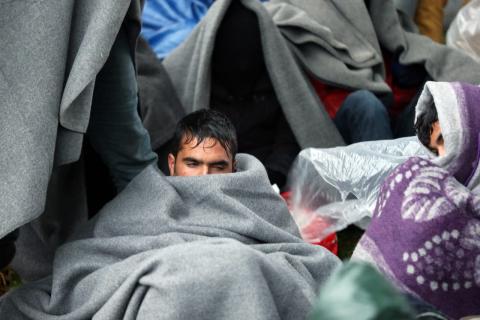 War Veterans in Croatia have warned they will set up road blocks if the government revives plans to locate a centre for asylum seekers in the small rural town of Petrina, about 60 kilometres southeast of Zagreb.

"We do not give up on our requests … If you do not meet them, we'll see you on the state roads on May 26, 2019," the War Veterans of Petrinja wrote on Thursday.

Local war veterans cited "security reasons" among their reasons for opposing the project initiated by the government to build a centre for asylum seekers in Mala Gorica, a village near Petrinja.

On Thursday, the government said it had abandoned its intention to build the asylum centre in Mala Gorica - but veterans claim their motives had been misrepresented.

"After months of waiting … you have responded to us and thank you for that … [but] you stressed again that we are not humane, have no solidarity and who knows what, and you praise yourself that you are transparent…" the veterans told Interior Minister Davor Bozinovic.

They claim the ministry did not contact the local population about its intention to build the asylum centre.

On Thursday, the Interior Ministry expressed surprise about the local hostility, "but acknowledged that the [Petrinja] town council made a negative decision on this, as well as the fact that the principle of humanity and the principle of solidarity cannot be imposed".

It explained that the centre had been intended to house "facilities for up to 200 persons, exclusively vulnerable groups of refugees, with an emphasis on families with children and persons seeking protection from persecution in their countries".

The ministry said that some of the the funds approved for the asylum centre would be redistributed to the...

Deadlocked for 13 years, Osilnica care home goes ahead
INTERVIEW/ Romanian Ambassador in Washington assures US investors that Gov't in Bucharest, functional, there is no legislative instability