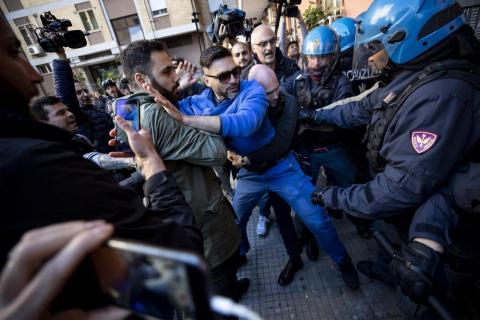 A Bosnian Roma family on Friday vowed to stay in their state-allocated apartment in Rome - despite far-right protests over a programme to relocate Roma families from a camp on the outskirts of the city - after the Pope personally showed support for them.

The last four days were traumatic for the Omerovic family but the situation seemed calmer on Friday, mother of 12 Senada Omerovic told BIRN, as only a small but a peaceful group of people protested in front of their building in Casal Bruciato.

"We have not slept in days, but last night we finally managed to have some rest," Senada said.

The Omerovic family came to Italy in 1992 as the 1992-1995 war started in Bosnia - but the decision to allocate them a flat in Rome attracted far-right protests, supported by neo-Fascists, starting on Monday, Italian media reported.

After days of protests and violent threats, the Omerovic were personally welcomed by Pope Francis in the Vatican on Thursday, who presided over a prayer meeting with some 500 minority Roma and Sinti people in Rome.

Although media reported that her son, Clinton Omerovic, had said that family wished to leave their new home, Senada said they would now re-think that, as they had waited for their new home more than two years.

"We would like to stay, to be part of this neighbourhood, I want to celebrate my new home with all neighbours here, as I planned before everything happened," she said.

She added that she and her family wanted a decent life in Italy and be treated as equal to any other Italians.

The mayor of Rome, Virginia Raggi, also visited the family to show her support after some of the protesters said they wanted to see the family "hanged and burned", Italian media site ANSA reported.