US ambassador reacts to Gen. Lazarevic at Victory Day event 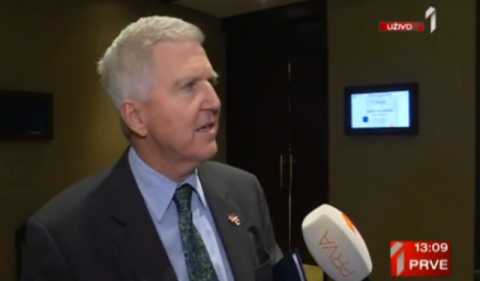 "It's disgraceful that a convicted war criminal walks in front of those who want to pay tribute to the allies who have died fighting for justice and peace in Europe. Europe Day=European values," Scott wrote in Serbian on Twitter.

He added a link to an article published by the daily Danas, with a photograph showing the Serbian president's general secretary, Nikola Selakovic, helping Lazarevic put on his coat.
General Lazarevic, a former Commander of the Pristina Corps and the Third Army of the Yugoslav Army (VJ), was convicted for crimes against humanity, violations of laws and customs of war and other inhumane acts to 14 years in prison before the Hague tribunal.
He was released on parole in December 2015 after having spent more than 10 years in the tribunal's custody.