US's Palmer points to Prespes deal as blueprint for region 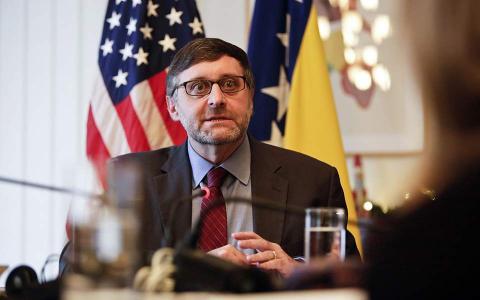 The Prespes name deal signed between Athens and Skopje should serve as a blueprint for resolving many bilateral differences in the Western Balkans, US Deputy Assistant Secretary of State for European and Eurasian Affairs Matthew Palmer was quoted on Friday by the Athens-Macedonia News Agency as telling Radio Free Europe.

According to the ANA-MPA, Palmer, who has responsibility for the Western Balkans and the Aegean, urged the leaderships of Serbia, Kosovo and Bosnia-Herzegovina to take a leaf out of Athens and Skopje's book and settle ongoing disputes that have been marring bilateral relations for decades, in an interview with the American media outlet.

"The Prespes agreement showed us the importance of leadership skills," Palmer said, in translated comments.

The US official went on to dismiss claims by critics of the name agreement that it was reached as a...