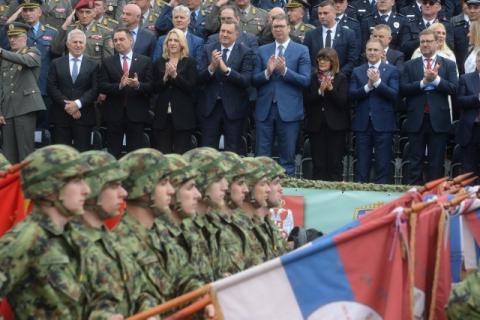 All three were in this town in southern Serbia to attend a military parade.
A photo of Dodik, Mandic, and Vucic has been posted on Instagram, on the Serbian president's "Future of Serbia" campaign account, saying that they discussed the current political situation in the region.
Mandic was this week sentenced to five years in prison by the High Court in Podgorica for the events on election day in Montenegro in October 2016, which that country regards as an attempted coup.
The court also found Milan Knezevic, another member of the opposition Democratic Front, guilty on the same charges.
After the verdict was announced, Mandic and Knezevic called on Vucic and Dodik to stop their communication with "the anti-Serb authorities in Montenegro."