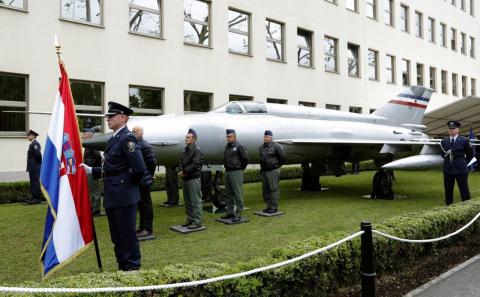 Prime Minister Andrej Plenkovic told the ceremony at the Ministry of Defence building in Zagreb on Sunday that the MiG-21 fighter plane was one of the main symbols of Croatia's 1991-95 'Homeland War'.

Plenkovic said that its return after 28 years of quiet diplomacy and government efforts was a mark of honour for all Croatian veterans and their families.

During the war in 1991, pilot Rudolf Peresin used the plane to desert from the Yugoslav Air Force, flying the MiG-21 fighter from Bosnia and Herzegovina to Klagenfurt in Austria. He was later quoted by media as saying: "I am Croatian, I cannot and won't shoot at Croatians."

"The message that Peresin sent in 1991, not only to the Croatian people but to the whole world, was a message of freedom, courage, strength, bravery and patriotism," Plenkovic said at the ceremony.

Peresin returned to Croatia just four days after deserting, but without the plane.

For nearly three decades after that, the fighter jet was kept at the Military Air Museum in Zeltweg, Austria because it was not clear to which successor state it belonged after the dissolution of Yugoslavia.

The aircraft will remain on display in front of the Ministry of Defence in Zagreb until the end of May, after which it will be moved to the Croatian Air Force base near Zagreb airport. However, Defence Minister Damir Krsticevic said it should later be moved to the planned Croatian Military Museum.

On May 2, 1995, Peresin was killed during the Croatian Army's Operation Flash in the country's Western Slavonia region. He was shot down by rebel Serb anti-aircraft artillery fire.

His remains were found in 1997 and he was buried at Zagreb's Mirogoj...