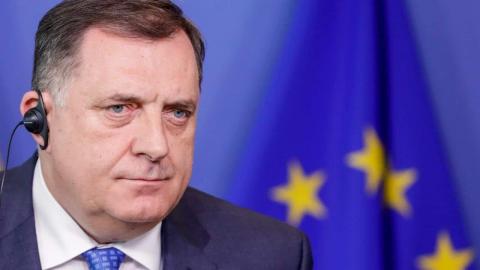 Bosnian Serb strongman Milorad Dodik said his party would lend symbolic backing to the far-right Austrian Freedom Party in the European Parliament elections in May - although Bosnia and Herzegovina is not a member of the EU and its citizens are not voting in the May 23-26 polls.

Dodik and Strache have long been supportive of each other even though the FPO is on the far right while Dodik's Alliance of Independent Social Democrats, SNSD, belongs nominally to the left.

This was their third meeting since Strache was appointed Vice Chancellor but the first since Dodik was elected as the Serbian member of the three-member Bosnian Presidency.

Dodik said Austrians have a lot of understanding for his view that Bosnia needs to maintain militarily neutral and stay out of NATO. Austria is a member of the European Union but not a NATO member.

More than six months after the last legislative elections, Bosnia still has not got a new government, and the main cause of disagreement remains activating the country's NATO Membership Action Plan, MAP, an essential step toward Bosnian accession to NATO.

Bosnian Serb leaders, who are close to Russia, are firmly against membership of the Western alliance, while Bosniak and Bosnian Croat politicians support it.

"We discussed the issue of military neutrality that we fully support. We are Austrians, we have full understanding for this, and this is very important for preventing conflicts in the future," Strache said.

He emphasized that he and Dodik have a long-lasting friendship. Dodik...