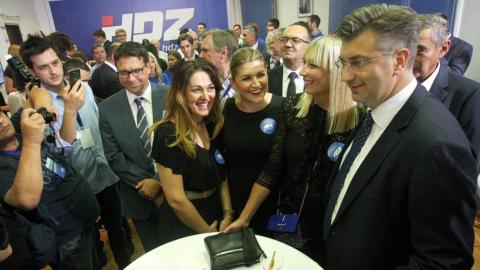 Plenkovic has developed a strategy of silence on many of the scandals that have embroiled his own ministers and party colleagues, to good effect, Mamic said.

"If you look at his position, this is effective and efficient communication," she said. "He gives short answers, because obviously the outcome of all these cases could go in any direction."

Such scandals are often attributed by Croatian media to score-settling within a political party.

Mamic said there was a popular saying in Croatia: "Why have enemies when you can have party friends?"

"I think that this can very often be applied in Croatia," Mamic told BIRN. "Actually a great many of these things play out within parties."

Here is a timeline of the scandals that have rocked the HDZ during its current stint in power:

2017 - Croatia's newly-installed HDZ-led government was confronted with the potential collapse of the country's biggest private company, Agrokor, and the loss of 40,000 jobs.

Moving to shield the Croatian economy, the government drafted a law, known as Lex Agrokor, allowing the state to temporarily take over running of the company in order to stave off bankruptcy.

Parliament passed the law in April 2017 but the next month Finance Minister Zdravko Maric was subjected to a confidence vote in the assembly over accusations he had a conflict of interest in his handling of the crisis given he was a senior executive at Agrokor until early 2016. Maric survived the vote by the thinnest of margins.