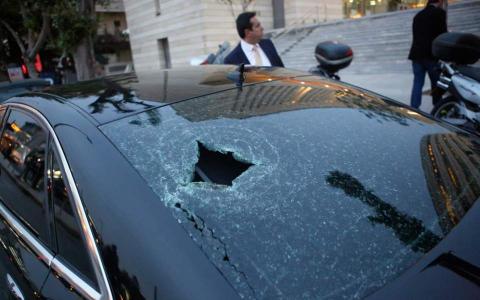 Self-styled anarchists clashed with police guarding an event in Athens where former conservative prime minister Antonis Samaras and other New Democracy lawmakers were in attendance.
A group of about 15 to 20 people exited from the campus of Panteion University on Wednesday afternoon, crossed Syngrou Avenue through the underpass and hurled firecrackers against the officers stationed outside the building on the other side.

According to reports, the car of MP Notis Mitarakis was among the three damaged in the attack.
"That is [PM Alexis] Tsipras' Greece for you," Samaras said, leaving the event.
In a separate incident, a group of anti-establishment protesters held a rally and shouted slogans in favor of jailed terrorist Dimitris Koufodinas outside a building where New Democracy's MEP candidate Vangelis Meimarakis was speaking.
A large police force kept...