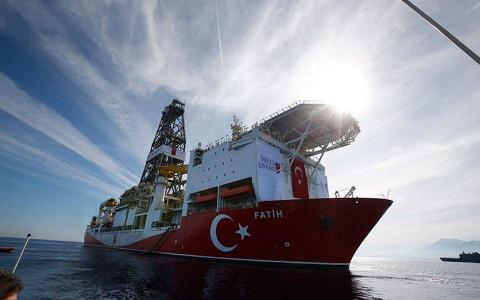 In the latest sign of Turkey's expansionist ambitions in the Eastern Mediterranean, representatives of foreign diplomatic missions in Ankara - including a Greek Embassy official - who were briefed about the country's plans for offshore drilling operations were shown maps that violated the sovereign territory of Greece and Cyprus.

During the briefing, which was delivered by Cagatay Erciyes, acting director general at the Turkish Foreign Ministry, it was alleged that Turkey's operations are held within the contours of its continental shelf and in areas where the breakaway state in the Turkish-occupied north of Cyprus has given state-run oil company Turk Petrolleri a license to operate.
Sources told Kathimerini that the presentation was met with skepticism from foreign diplomats, including Israeli and Egyptian officials. The breakaway state is only recognized by Ankara.