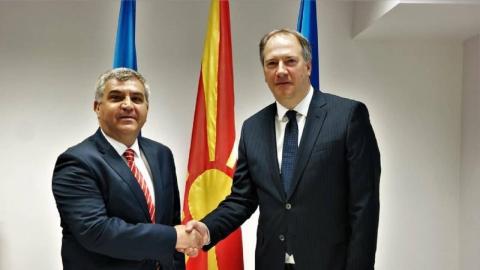 Parliament in Ankara will soon ratify the NATO accession protocol for North Macedonia and will not condition this with Skopje delivering suspected supporters of exiled Turkish cleric Fethullah Gulen, whom Ankara considers terrorists, Deputy Foreign Minister Faruk Kaymakci has said in an interview.

The only reason why the Turkish parliament has not yet ratified the NATO accession protocol for North Macedonia is because it was closed for the local elections in Turkey, Kaymakci told the North Macedonia state news agency, MIA, in an interview published on Tuesday.

Kaymakci made the reassuring remarks amid fears that the traditionally warm Ankara-Skopje friendship might be tested by recent requests that North Macedonia extradites 15 Turkish nationals to Turkey related to terrorism charges.

During an April 3 visit to Skopje, Turkish Defence Minister Hulusi Akar stepped up pressure on Skopje to deliver the wanted persons.

Although Akar also underlined the traditional close friendship between the two countries, some media North Macedonia interpreted the statement as a form of blackmail, as Turkey, unlike other neighbouring Balkan countries, had not yet ratified North Macedonia's NATO accession protocol.