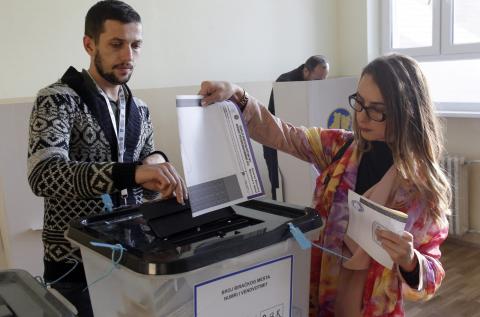 Sunday's election comes at a moment of tension between Belgrade and Pristina, with European Union-mediated talks to settle relations between the two seemingly deadlocked and Kosovo refusing to remove a 100-per cent import tariff on Serbian goods imposed last year in retaliation for Serbia's lobbying against Kosovo's membership of Interpol.

Kosovo-based journalist Milica Andric Rakic said the party's campaign slogan of 'The Only One' reflected how Srpska Lista was trying to present itself "as the only option that demonstrates the unity of the Serbs".

The party's chief goal, she told BIRN, was a high turnout so "Aleksandar Vucic could show the support he has from Kosovo Serbs for his politics towards Kosovo."

Previous elections in northern Kosovo have been marred by coercion and pressure on public sector workers.

Three of the four mayors who resigned - Goran Rakic in North Mitrovica, Vucina Jankovic in Zvecan and Zoran Todic in Leposavic - are running for re-election on behalf of Srpska Lista. The party nominated Srdjan Vulovic for Zubin Potok.

The party's campaign has been marked by sharp criticism of rival ethnic Serb parties, despite the fact they are not taking part in the elections. Some analysts have taken this as a sign of nerves as Srpska Lista tries to get out the vote.

Officials from the Progressive Party of Serbian President Vucic have joined in, targeting in particular Marko Jaksic, the leader of the civic initiative Serbia, Democracy,...