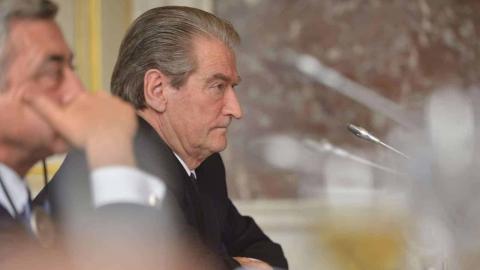 A local dispute has turned into became a much larger inter-ethnic row after unknown perpetrators removed a wooden cross from the foundations of St. Vasilije Ostroski church in the village of Martinaj and threw it into a nearby stream.

The incident was reported by Montenegrin media on Tuesday but escalated when former Albanian Prime Minister Sali Berisha wrote on Facebook that "Montenegro-Serbian extremists are restoring the church to provoke Albanian residents".

"I call on local and state authorities in Montenegro to intervene and prevent the illegal activities of extremist groups that cause inter-ethnic and religious tensions," Berisha wrote on Thursday.Since 2001, the Serbian Orthodox Church has been trying to restore the church, of which only the foundations remain, but the ethnic Albanian majority in the village has consistently opposed the initiative.

Martinaj is situated in the mainly Bosniak and Albanian municipality of Gusinje, where locals have previously asked ethnic Albanian politicians to demand that the restoration work on the church be halted, calling it a 'provocation'.

During a gathering of priests and Orthodox believers at the church foundations in 2013, a conflict erupted with local villagers, and police arrested 22 people.Orthodox Christians and priests set up a wooden cross at the site at end of April, but it was removed two weeks afterwards

"Orthodoxy is a religion of peace, love and forgiveness, but we also expect citizens of other religions to behave in such a way and not to try to deny anyone the freedom of religion, as we do not do that," Radunovic told daily newspaper on Vijesti...