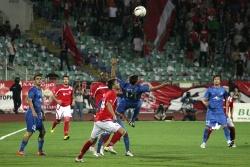 The Sofia Metropolitan Directorate of Interior undertakes all necessary measures to protect the public order and traffic safety in the capital in connection with the upcoming derby today at 18.00 at the National Stadium "Vasil Levski". This was announced by the Ministry of Interior press center.

Before, during and after the sporting meeting, police officers will monitor the maintenance of public order and the prevention of incidents in the city. At built checkpoints in the area of ​​the sports facility policemen will conduct a thorough inspection of all visitors of the football match. Strict measures have been taken to prevent visitors who have a court ban on attending sporting events. Minors will only be admitted to the stadium with an adult guardian and a pre-filled declaration that can also be downloaded from the Internet.

Police will watch out for apparently intoxicated spectators, as well as for wearing prohibited items and items (firearms, pyrotechnics, knives, sticks, boxes, bottles, including perfumes and umbrellas).

Commitment to the security of the sports meeting is held by private security companies whose task is to monitor the order of the territory of the stadium during the meeting. In their activity, they will be assisted by police officers who will intervene as they arise.

To avoid crowding, we invite viewers to take advantage of the earlier opening of stadium entrances. Visitors' doors will be open at 4 pm On the day of the football match tickets at the National Stadium "Vasil Levski" will not be sold.

In connection with the sports event, in the afternoon there may be a temporary difficulty in traffic in the central city area.