Merkel and Weber Must Reject the Croatian HDZ’s Radical Agenda 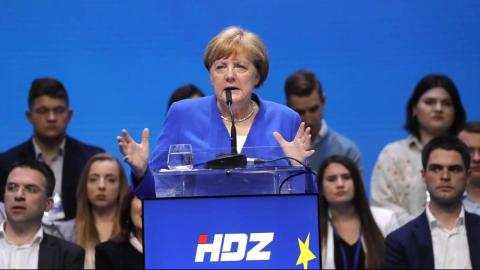 The HDZ and its sister party in Bosnia and Herzegovina have long advocated ethnically 'federalising' Bosnia and Herzegovina. This is in line with the HDZ's embrace of convicted war criminals who took part in a joint effort to carve up the country with Bosnian Serb separatists during the 1992-95 war.

Senior figures in the party and its affiliate in Bosnia and Herzegovina have also embraced symbols of the WWII collaborationist regime in Croatia, which murdered tens of thousands of Serbs, Roma and Jews.

The message articulated by Merkel and Weber in Zagreb was directly opposed to the nationalist irredentism and revisionism promoted by Thompson, selected to be the troubadour of the HDZ's agenda.

Merkel said that "patriotism and Europe are not at odds with each other, nationalism is attempting to destroy Europe, and we have to fight it".

Weber was equally clear: "In Milan, in Italy, the nationalists are meeting there," he said. "Le Pen is standing in the first row, and says to her people, 'Be proud of France, and to hell with Europe.' We need to answer this. I will fight against this nationalism, they will not be part of the majority of Manfred Weber."

Their own personal credibility in...

On right side of history