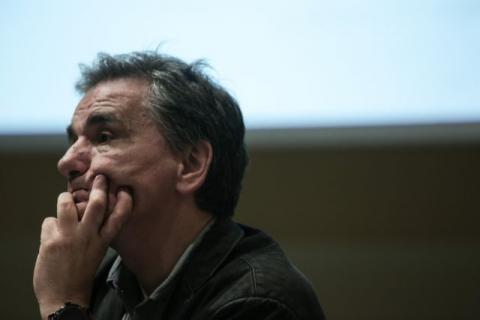 Just three days before crucial European Parliament and local elections, Finance Minister Euclid Tsakalotos offered an accounting of the successes and defeats of the government during his nearly four years as minister even as he expressed concerns about the problems and future of the eurozone.

In an interview with Italy's Il Manifesto and Luciana Marcelina - an iconic figure of the Italian left who is a journalist and a former long-time Italian MEP and is running symbolically on the SYRIZA European Parliament ticket - Tsakalotos said that the worst is behind for Greece.

'We cut pensions, tried to make it less painful'

He said that the worst thing that the government did was to cut pensions, "although we tried to make it less painful than the right-wing would have".

However, when asked what the government's economic plan and model will be in the post-bailout era, which allows greater room for economic manoeuvres - Tsakalotos offered generalisations.

"The priorities of the model we are following are the opposite of those of the neo-liberals. Our fiscal policy aims at just tax cuts and the satisfaction of basic social needs. As regards growth, we support healthy entrepreneurship and small-and-medium-sized businesses," he said.

"Above all, our objective is to bolster the social economy - including agricultural cooperatives and energy communities."

The finance minister said this requires "dynamic social forces that are capable of exploiting the new legal framework that we are creating" but did not elaborate.

"Because we are left-wing people, we are cognizant of the fact that laws and a left-wing government are simply a...

Editorial: The queues of backwardness