Vucic to be "no sitting duck" during Kosovo session 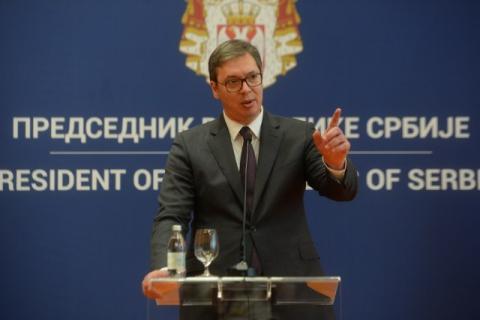 But the president emphasized that he would not present tactical plans and would the next steps to opponents, because it would be illogical.

He told a new conference after meeting with representatives of erbs from Kosovo and Metohija, commenting on certain media reports that he would not present any new plan, that it was logical that the state would not publicly announce its plans and presents its next step to the adversaries.
Vucic said that he would report to the Assembly on what has been happening thus far, and that he would speak in principle about how to fight for the Serb people, but so that no tactical move is revealed.
The president rarely comes to parliament to speak, Vucic said, adding that the opposition has asked him to do that, that he was criticized for not doing so, accused of disparaging the legislative body - and now that he will come to speak about Kosovo and Metohija and answer all parliamentary questions, they do not want to attend.
Vucic said that the opposition is now once gain saying he will be attacking them - but that he in fact plans "to tell the truth about who invested what amount in Kosovo and Metohija, who in what way protected the Serb people in Kosovo and Metohija."
He stressed that the opposition can continue to talk about everything that comes to their mind, such as him being a miserable person and a traitor - but that he will not be silent about it. Instead, Vucic revealed, he will reply with arguments "both in facts and figures" - and will not come to parliament to be "a sitting duck - to be shot at without defending myself."