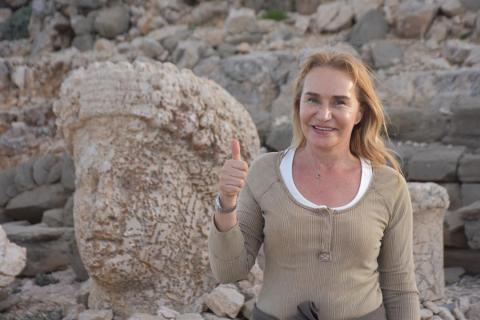 "I reckon that if we had a five-fold capacity it would also be filled," local tourism director Mustafa Ekinci told Anadolu Agency.

"We need to improve our accommodation capacity," he said.

"This liveliness will continue from now on. I make a call to the big investors: Adıyaman is worth investing in."

The number of visitors to Mount Nemrut, one the highest peaks of Mesopotamia at 2,206 meters in height and home to the tomb of King Antiochus I of Commagene, increased to 19,870 in April, some 60 percent up from the same month a year earlier.

The gigantic statues of gods, each weighing 6 tons and 10 meters tall, indicate that a "super-human effort" was spent on the construction of the tomb.

The Commagene Kingdom dominated the region for almost two centuries between 109 BC and 72 AD, and is considered to be a remarkable civilization unifying the cultures and beliefs of Macedonians and Persians.

It is also indicative that Mithridates I Callinicus, the founder of the kingdom, had ancestral lineage deriving from both Darius the Great of Achaemenid Empire and Alexander the Great of the Kingdom of Macedon, and that relationship had a bearing on this unifying process.

Nemrut, located in Adıyaman's Kahta district, has been a UNESCO World Heritage site since 1987.

In 2018, more than 50,000 tourists visited the mountaintop site, which is also famous for its stunning sunrises and sunsets.