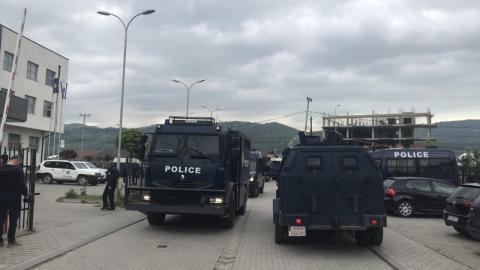 Kosovo police launched raids in the early hours of Tuesday morning in the Serb-majority north of the divided town of Mitrovica, sparking an angry reaction from Serbia.

Ten people have been arrested so far, and the police action is ongoing, according to a BIRN reporter.

Among those arrested is the chief of police of the village of Zubin Potok, said Syle Hoxha, the prosecutor in the case.

A Kosovo police officer was wounded by a gunshot during the operation, but is not in danger of losing his life. Two other officers were also injured, according to doctors in North Mitrovica.

Police said that in Zubin Potok, barricades were set up and tyres set on fire to deter police officers.

Kosovo police said the operation was launched to detain suspects who have allegedly been participating in or organising criminal groups and have been involved in the smuggling of goods, misuse of official positions, bribery and trading in contraband.

"Even though the police operation was confronted with armed resistance in the north of Mitrovica, it is continuing and it includes arrests and taking control over some locations, which has resulted in the confiscation of relevant evidence, including rifles," police said in a statement.

Police also said that the operation has nothing to do with the murder of Enver Zymberi, a policeman who was killed in the north of Kosovo eight years ago, nor with the investigation into the death of Kosovo Serb politician Oliver Ivanovic, who was murdered in 2018.

Prime Minister Ramush Haradinaj said that the aim was to target "individuals involved in contraband, organised crime and other criminal acts" and that the operation was not against Serbs in general.

"Some persons involved in these acts are customs...