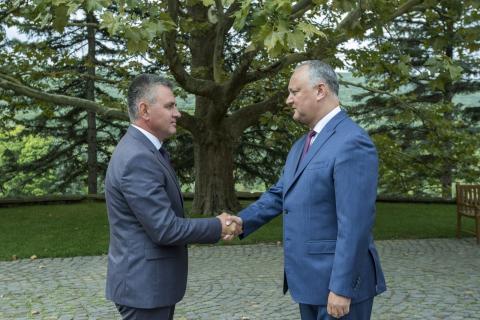 Vadim Krasnoselsky told foreign diplomats on Tuesday evening that the breakaway region wants to launch an international lawsuit over "the aggression against the people of Transnistria".

He said that Transnistria will ask for compensation.

Krasnoselsky argued that during the Dniester armed conflict between separatists and government forces in 1992, the Moldovan army committed "war crimes" and "crimes against humanity".

He cited the case of the so-called 'Ilascu Group', four Moldovan soldiers who have been detained in Transnistrian prisons for many years.

"Those who shot Nikolay Ostapenko [a Transnistrian clerk] received state awards from Moldova. They were elected in absentia to the parliaments of Moldova and Romania," said Krasnoselky.

However Krasnoselsky did not say which international court Transnistria intends to address with its claim.

He also announced at the meeting with the foreign diplomats that he has asked Moldovan President Igor Dodon to offer a legal and political appreciation of the 1992 armed conflict, which he said would be a step towards in "normalising Moldovan-Transnistrian relations".

Dodon has not responded so far.

In January 2018, Moldova's speaker of parliament, Andrian Candu, talked about the possibility that Moldova could sue Russia and ask for compensation due to the damage sustained by about 1,500 Russian soldiers stationed in the breakaway region of Transnistria.

On March 2, 1992, when Moldova was officially accepted as a member of the United Nations, a group of paramilitary Transnistrian forces, together with Russian Cossacks, mercenaries and members of the former Soviet 14th Army attacked a police station in the city of Dubasari.

Some Moldovan policemen were killed, and...