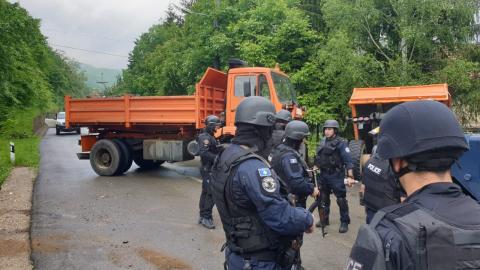 A Russian member of the UN Mission in Kosovo who was injured while being arrested in a police operation in northern Kosovo on Tuesday has been sent to hospital in Serbia, UNMIK confirmed on Thursday.

Mikhail Krasnoshchenkov was sent to Belgrade from the Intensive Care Center in North Mitrovica, where he was being treated, UNMIK added.

The prosecution in Mitrovica had asked the UN mission, UNMIK, to remove his immunity following his arrest by Kosovo Police in the mainly Serbian north of Kosovo.

UNMIK confirmed to BIRN that the Russian staffer was being transferred to Serbia, "to a facility that can offer specialist treatment in line with the sustained injuries".

It also reminded the judicial authorities in Kosovo that members of its mission enjoy immunity from arrest during the course of their duties.

"A second UNMIK staff member, who had been in detention since his arrest on May 28, was released on May 29 at 22:30 and was taken to a medical facility in Kosovo to be treated for the injuries he sustained during his arrest. The staff member, a Kosovo-Serb, is in a stable condition and is being closely monitored," Sanam Dolatshahi, the UNMIK spokesperson, told BIRN.

After the action, the police declared that the two UN staff members, with their car, formed part of a barricade that police had to remove to enter the village of Zubin Potok and complete their operation. The barricades were erected by local Serbs to stop the police operation.

"There are allegations raised that police applied force against clearly identified UN staff. UNMIK has yet to receive adequate...