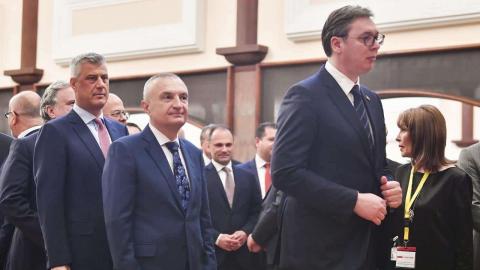 It is not easy to keep secrets, especially about a matter of such national importance. It is rumoured that Thaci and Vucic plan to announce a deal to swap territories just prior to their next meeting in Paris on July 1.

According to a prominent Kosovo personality, these are the deal terms:

Serbia will agree to recognise Kosovo.

Kosovo will get four to seven villages in the Presevo Valley, which are currently part of Serbia. These villages may not form a contiguous territory.

Gazivoda Lake, which is crucial for Kosovo's electricity and water supply, will become a trust territory under the supervision of an international organisation (eg. NATO).

An Association of Serbian Minority Communities (ASM) will be established in other parts of Kosovo where Serbs reside. The ASM will be responsible for urban and rural planning.

The agreement is silent on the Trepca mines, which span territories in both countries. (Failing to address the status of Trepca gives rise to the question: Who benefits?)

Other villages were transferred to Bujanovac: Dobrosin and Konculj, as well as the mountain villages of Bujanovac, Pribovac and Zarbince. These 11 villages total about 85 square kilometres.

In 1959, 45 residences of the region of Raska were transferred to Kosovo. A part of Leshak and Zubin Potok also joined Kosovo. The decision on these territorial changes was taken solely by Belgrade. At that time, Kosovo's political status was limited to an autonomous...