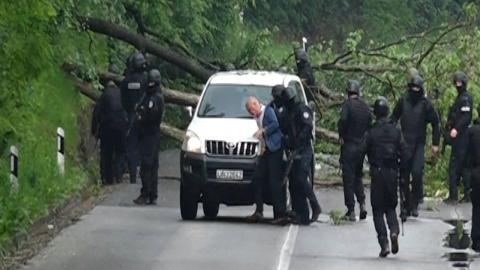 He said the decision had been made based on his acts against the constitutional order of Kosovo and the universal values of peace and stability.

Kosovo police said the Russian member of the UN mission in Kosovo tried to impede a police operation in the Serb-run north of Kosovo on Tuesday, using his vehicle to form a barricade preventing police from entering a village.

After being injured during his arrest, he has since been transferred to a hospital in Serbia to recover.

"This decision comes after UNMIK hesitated to remove the immunity of the official and to cooperate with the judicial authorities," Jeltir Zymberaj, chef-de-cabinet of Foreign Minister Behgjet Pacolli said.

"I invite the Special Representative of the UN General Secretary in Kosovo to respect this decision," Haradinaj said.

Russia is meanwhile still smarting over the arrest of its staffer in Kosovo.

The United Nations must respond to Pristina's attempts to revoke immunity of a Russian diplomat who is a member of the UN Interim Administration Mission in Kosovo, Russian Foreign Minister Sergey Lavrov said in Japan on Friday.

"The absolutely unacceptable behavior of [the unrecognized Kosovo's authorities] towards a Russian member of the UN mission in Kosovo cannot be justified in any way. And their attempts to strip our member of his...

European Taekwondo Championship 2021 to Be Held in Sofia