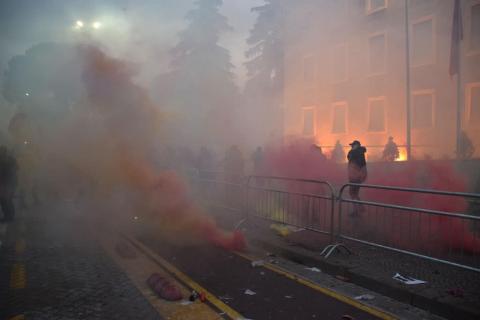 At their seventh large protest, the opposition parties again called for the removal of Prime Minister Edi Rama and his Socialist-led government.

Most recent opposition protests have ended in violence, with protesters attacking buildings with firecrackers and Molotov bombs, while police responded with teargas and water cannons. However, the amount of firecrackers used on Sunday was unprecedented, and some were very large.

BIRN saw one protester falling to the ground after a firecracker exploded near his leg. A cameraman also suffered injuries and was incapacitated for several minutes. Police announced over loud-speakers that several officers had been injured in the violence.

The leader of the main centre-right opposition Democratic Party, Lulzim Basha, announced later that the next protest would take place on 8 June, and warned of a further escalation.

Western countries have become increasingly concerned about the level of political violence and polarisation in Albania, and the US embassy in Tirana condemned the violence on Sunday only minutes after it ended.

"The use of pyrotechnics, especially when aimed at police, is not a peaceful act, is unacceptable, and undemocratic. We call on the organizers of the protest to stop the violent acts and engage in constructive dialogue," the US embassy said on Facebook.

Unabashed, Prime Minister Rama was in the town of Lezha, north of Tirana, on Sunday, opening the Socialist Party campaign for the local elections due on June 30.

The opposition parties have vowed to boycott the forthcoming local elections and in most municipalities only a single candidate is standing for mayor.