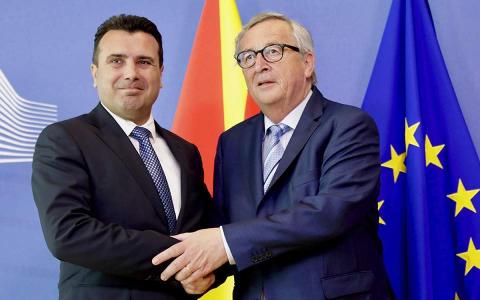 EU Commission chief Jean-Claude Juncker indicated on Tuesday that he was not concerned about the effect a possible change in government in Greece will have on the Prespes accord, noting it is an official agreement signed between two states.

"The Prespes Agreement was between two states, not between two governments. The governments are institutions of the state," he said at a joint news conference in Brussels with North Macedonia's Prime Minister Zoran Zaev.
The deal, signed in 2018 and ratified earlier this year, opened the way for North Macedonia to join NATO and the EU, by ending a long-running dispute with Greece over the country's name.
Responding to the same question, Zaev said the agreement is beneficial for both countries: "Politicians come and go, but the benefits for the people remain."