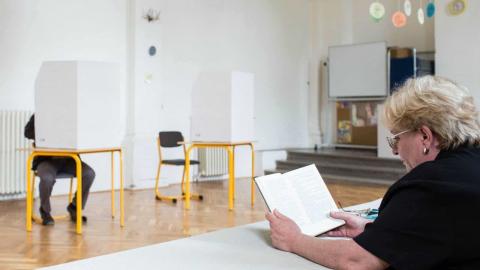 Stefunko and Beblavy, both 42, are fast emerging as the faces of a new generation of professionals - human rights lawyers, think tankers, entrepreneurs, artists, architects and non-profit activists - in their 30s and 40s who have converged on the two parties as what they see as their best hope of changing a staid political system discredited by corruption and cosy ties to shady business.

With Caputova due to take office on June 15, reporters have taken to calling them the 'hipsters in power'.

"As a team, we opt for a clear, pro-European orientation and a different style of leadership, based on a charismatic idea, not on a leader," said Beblavy.

"We also share a deep discontent with how the country has been governed."

Entrepreneur and investor Stefunko, the more flamboyant and liberal member of the tandem, said: "I had ups and downs, but now, with kids, at the peak of my career, I think it's a good time to put my professional life at risk and do something for others in the country."

A woman at a polling station in Bratislava, Slovakia. Photo: EPA/JOZEF JAKUBCO

Progressive Slovakia and Together were formed in late 2017 and early 2018 respectively.

In February 2018, 27-year-old investigative journalist Jan Kuciak and his fiancée were shot dead in their home, apparently a contract killing to silence Kuciak's reporting on corrupt business deals. Tens of thousands of Slovaks rallied in anger and disgust, eventually forcing the resignation of the prime minister, Robert Fico.

Local elections followed in the...