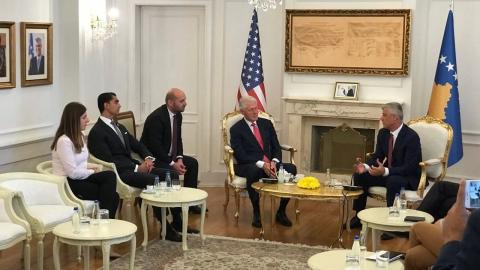 Bill Clinton was honoured by Kosovo on Tuesday for his role in ordering the NATO bombing of Yugoslavia, which led to the end of the war 20 years ago.

"We thank you for the just decision to stop the Serbian genocide during 1999. We are very grateful for the support of the US to Kosovo. The story of Kosovo is a story of joint success. You are our hero," President Hashim Thaci told Clinton.

"I will always be proud of the fact that I happened to be the president of the United States when you needed someone to stand up and say no more ethnic cleansing, no more people running out of their homes, no more killing innocent civilians, there's got to be another way," Clinton responded.

The former US president arrived in Kosovo ahead of commemorations on Wednesday of the 20th anniversary of NATO troops entering the country.

Former US Secretary of State Madeleine Albright is also in Kosovo, where a statue of her will be inaugurated in Pristina on Wednesday.

NATO launched its 78-day campaign of air strikes against Serbia in 1999 in an attempt to force then-President Slobodan Milosevic to accept the terms of an agreement to end his military campaign against the Kosovo Liberation Army, which involved widespread ethnic cleansing and killings of Kosovo Albanian civilians.

After Milosevic's troops withdrew in June 1999, NATO forces entered the country. NATO's Kosovo force, KFOR, has been deployed in the country since then.